It was good! Though next time, I think I’ll find a hotel rather than a truck-stop motel. The motel was good for a motel, but, erm, seemed designed for one-night stop-overs rather than four consecutive nights. Next time, hotel. With breakfast. Breakfast would be lovely.

ANYWAY! Volunteered at the Writer’s Symposium, which was exhausting but in a good way. Kept me busy and I was still able to go to pretty much all the panels and presentations that I’d wanted (and ended up going to a couple unexpected ones, and missing a few that I realized weren’t quite what I thought they were when I registered). Oh! And got all the books I’d brought for signing signed by some of my favorite authors, which was awesome.

If I think of more, I’ll add to this post.

I’ve arrived! Well, two days ago, but this is one of the few times I haven’t been attending papers and panels and events, and had the chance to do a dress rehearsal of my paper. While in the hammock. Under the lovely Florida sun (this is only partially facetious; I managed to buy a pair of sunglasses so my antagonistic relationship with sunlight is a little less than usual).

So far, it’s been a blast and extraordinarily educational. I’m less than a neophyte academic, so I have much to learn (but I’m learning! I think…).

Anyway, have pictures of palm trees! And green! Which is so very, very not what Chicago looks like right now. (Also, my phone camera is old and terrible, and I’m not much of a photographer, so the quality is so-so) 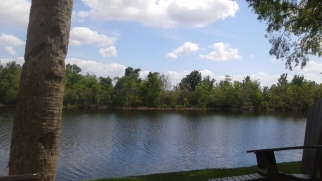 I’ll be heading out to ICFA 40 in Orlando next Wednesday to present my paper, “Story Promise: The Implicit Contract Between Writer and Reader” (’tis on Saturday, at 10:30am). This’ll be both my first ICFA and my first public presentation of a paper. I’ve done readings before, though they’ve tended toward small-scale, maybe-twenty-at-most crowds primarily made up of friends or friends of friends. The closest I’ve ever come to an academic paper presentation were the few I attended at WisCon about five years ago.

No idea what to expect, and it’s got me both terrified and thrilled. I’ve also never been to Orlando–or Florida, for that matter. I’m looking forward to the rather sudden change in weather. In Chicago today, it’s a high of 15°F, though it feels like 2°. In Orlando it’s 61°, and today is the coolest day this week.

In other news, my new bookmarks came in! Since none of my bios in the anthologies have my website, I figured I needed something to point people here, but business cards (I feel) are the first things to end up in the trash after a convention. Bookmarks, however, serve dual purposes: they do promo while simultaneously being something useful. Since I’m only published in anthologies right now, I don’t have a snazzy book cover to throw on there, so the dragon in my header image found another home. Bookmarks bought through GotPrint.com, which offers rather affordable printing options.